Parents and teachers of gifted children can gain a lot of insight by reading the article below. The article was originally a speech held by Stephanie Tolan at a conference on giftedness. The metaphor of the cheetah is a beautiful metaphor for the gifted child. If there is recognition for the child and his/her giftedness the child can blossom.

Is It a Cheetah?

It’s a tough time to raise, teach or be a highly gifted child. As the term “gifted” and the unusual intellectual capacity to which that term refers become more and more politically incorrect, the educational establishment changes terminology and focus.

Giftedness, a global, integrative mental capacity, may be dismissed, replaced by fragmented “talents” which seem less threatening and theoretically easier for schools to deal with. Instead of an internal developmental reality that affects every aspect of a child’s life, “intellectual talent” is more and more perceived as synonymous with (and limited to) academic achievement.

A cheetah metaphor can help us see the problem with achievement-oriented thinking. The cheetah is the fastest animal on earth. When we think of cheetahs we are likely to think first of their speed. It’s flashy. It is impressive. It’s unique. And it makes identification incredibly easy. Since cheetahs are the only animals that can run 70 mph, if you clock an animal running 70 mph, IT’S A CHEETAH!

But cheetahs are not always running. In fact, they are able to maintain top speed only for a limited time, after which they need a considerable period of rest.

It’s not difficult to identify a cheetah when it isn’t running, provided we know its other characteristics. It is gold with black spots, like a leopard, but it also has unique black “tear marks” beneath its eyes. Its head is small, its body lean, its legs unusually long — all bodily characteristics critical to a runner. And the cheetah is the only member of the cat family that has non-retractable claws. Other cats retract their claws to keep them sharp, like carving knives kept in a sheath –the cheetah’s claws are designed not for cutting but for traction. This is an animal biologically designed to run.

Its chief food is the antelope, itself a prodigious runner. The antelope is not large or heavy, so the cheetah does not need strength and bulk to overpower it. Only speed. On the open plains of its natural habitat the cheetah is capable of catching an antelope simply by running it down.

While body design in nature is utilitarian, it also creates a powerful internal drive. The cheetah needs to run!

Despite design and need however, certain conditions are necessary if it is to attain its famous 70 mph top speed. It must be fully grown. It must be healthy, fit and rested. It must have plenty of room to run. Besides that, it is best motivated to run all out when it is hungry and there are antelope to chase.

If a cheetah is confined to a 10 X 12 foot cage, though it may pace or fling itself against the bars in restless frustration, it won’t run 70 mph.

If a cheetah has only 20 mph rabbits to chase for food, it won’t run 70 mph while hunting. If it did, it would flash past its prey and go hungry! Though it might well run on its own for exercise, recreation, fulfillment of its internal drive, when given only rabbits to eat the hunting cheetah will run only fast enough to catch a rabbit.

If a cheetah is fed Zoo Chow it may not run at all.

If a cheetah is sick or if its legs have been broken, it won’t even walk.

And finally, if the cheetah is only six weeks old, it can’t yet run 70 mph.

IS IT, THEN, ONLY A *POTENTIAL* CHEETAH? 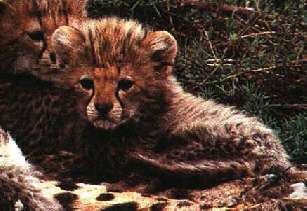 A school system that defines giftedness (or talent) as behavior, achievement and performance is as compromised in its ability to recognize its highly gifted students and to give them what they need as a zoo would be to recognize and provide for its cheetahs if it looked only for speed. When a cheetah does run 70 mph it isn’t a particularly “achieving” cheetah. Though it is doing what no other cat can do, it is behaving normally for a cheetah.

To lions, tigers, leopards — to any of the other big cats — the cheetah’s biological attributes would seem to be deformities. Far from the “best cat,” the cheetah would seem to be barely a cat at all. It is not heavy enough to bring down a wildebeest; its non-retractable claws cannot be kept sharp enough to tear the wildebeest’s thick hide. Given the cheetah’s tendency to activity, cats who spend most of their time sleeping in the sun might well label the cheetah hyperactive.

Like cheetahs, highly gifted children can be easy to identify. If a child teaches herself Greek at age five, reads at the eighth grade level at age six or does algebra in second grade we can safely assume that child is a highly gifted child. Though the world may see these activities as “achievements,” she is not an “achieving” child so much as a child who is operating normally according to her own biological design, her innate mental capacity. Such a child has clearly been given room to “run” and something to run for. She is healthy and fit and has not had her capacities crippled. It doesn’t take great knowledge about the characteristics of highly gifted children to recognize this child.

However, schools are to extraordinarily intelligent children what zoos are to cheetahs. Many schools provide a 10 x 12 foot cage, giving the unusual mind no room to get up to speed. Many highly gifted children sit in the classroom the way big cats sit in their cages, dull-eyed and silent. Some, unable to resist the urge from inside even though they can’t exercise it, pace the bars, snarl and lash out at their keepers, or throw themselves against the bars until they do themselves damage.

Even open and enlightened schools are likely to create an environment that, like the cheetah enclosures in enlightened zoos, allow some moderate running, but no room for the growing cheetah to develop the necessary muscles and stamina to become a 70 mph runner. Children in cages or enclosures, no matter how bright, are unlikely to appear highly gifted; kept from exercising their minds for too long, these children may never be able to reach the level of mental functioning they were designed for.

A zoo, however much room it provides for its cheetahs, does not feed them antelope, challenging them either to run full out or go hungry. Schools similarly provide too little challenge for the development of extraordinary minds. Even a gifted program may provide only the intellectual equivalent of 20 mph rabbits (while sometimes labeling children suspected of extreme intelligence “underachievers” for NOT putting on top speed to catch those rabbits!) Without special programming, schools provide the academic equivalent of Zoo Chow, food that requires no effort whatsoever. Some children refuse to take in such uninteresting, dead nourishment at all.

To develop not just the physical ability but also the strategy to catch antelope in the wild, a cheetah must have antelopes to chase, room to chase them and a cheetah role model to show them how to do it. Without instruction and practice they are unlikely to be able to learn essential survival skills.

A recent nature documentary about cheetahs in lion country showed a curious fact of life in the wild. Lions kill cheetah cubs. They don’t eat them, they just kill them. In fact, they appear to work rather hard to find them in order to kill them (though cheetahs can’t possibly threaten the continued survival of lions). Is this maliciousness? Recreation? No one knows. We only know that lions do it. Cheetah mothers must hide their dens and go to great efforts to protect their cubs, coming and going from the den under deep cover or only in the dead of night or when lions are far away. Highly gifted children and their families often feel like cheetahs in lion country.

In some schools brilliant children are asked to do what they were never designed to do (like cheetahs asked to tear open a wildebeest hide with their claws — after all, the lions can do it!) while the attributes that are a natural aspect of unusual mental capacity — intensity, passion, high energy, independence, moral reasoning, curiosity, humor, unusual interests and insistence on truth and accuracy — are considered problems that need fixing.

Brilliant children may feel surrounded by lions who make fun of or shun them for their differences, who may even break their legs or drug them to keep them moving more slowly, in time with the lions’ pace. Is it any wonder they would try to escape; would put on a lion suit to keep from being noticed; would fight back?

This metaphor, like any metaphor, eventually breaks down. Highly gifted children don’t have body markings and non-retractable claws by which to be identified when not performing. Furthermore, the cheetah’s ability to run 70 mph is a single trait readily measured. Highly gifted children are very different from each other so there is no single ability to look for even when they are performing; besides that, a child’s greatest gifts could be outside the academic world’s definition of achievement and so go unrecognized altogether. While this truth can save some children from being wantonly killed by marauding lions, it also keeps them from being recognized for what they are — children with deep and powerful innate differences as all-encompassing as the differences between cheetahs and other big cats.

That they may not be instantly recognizable does not mean that there is no means of identifying them. It means that more time and effort are required to do it. Educators can learn the attributes of unusual intelligence and observe closely enough to see those attributes in individual children. They can recognize not only that highly gifted children can do many things other children cannot, but that there are tasks other children can do that the highly gifted cannot.

Every organism has an internal drive to fulfill its biological design. The same is true for unusually bright children. From time to time the bars need be removed, the enclosures broadened. Zoo Chow, easy and cheap as it is, must give way, at least some of the time, to lively, challenging mental prey.

More than this, schools need to believe that it is important to make the effort, that these children not only have the needs of all other children to be protected and properly cared for, but that they have as much RIGHT as others to have their needs met.

Biodiversity is a fundamental principle of life on our planet. It allows life to adapt to change. In our culture highly gifted children, like cheetahs, are endangered. Like cheetahs, they are here for a reason; they fill a particular niche in the design of life. Zoos, whatever their limitations, may be critical to the continued survival of cheetahs; many are doing their best to offer their captives what they will need eventually to survive in the wild. Schools can do the same for their highly gifted children.

Unless we make a commitment to saving these children, we will continue to lose them and whatever unique benefit their existence might provide for the human species of which they are an essential part.

Need help for your gifted child? Read more on how I can help.